Striding purposefully through the outside forecourt of Howrah railway station, I was hit on the head by a missile thrown by a monkey high up in a tree. With thankfully just my pride hurt, I put this act of thuggery behind me and hopped on the overnight Kolkata / Varanasi train.

We were delayed and it was mid-afternoon by the time we arrived, blisteringly hot and I had a lump on my head. The station was heaving with people and our train contributed a further 1,800 or so as we spilled out onto the platform. I headed to a bench to let the crowds abate.

An old boy had passed away on the train during the night. As I faffed around with my rucksack, his body was brought out and laid down on the ground next to me. A small sheet was placed over him, covering just his head and torso. He had been travelling alone, no-one was at the station to meet him and not a single official person stayed with the body. The rat race was in full swing around us as commuters stepped over him without a second thought.

I sat quietly and respectfully with him for a while but soon, I too left him be and headed outside. A tuk tuk brought me towards Varanasi Old City to my hotel right on the bank of the sacred river Ganges.

Varanasi is often referred to as the Holy City of India; Hindus who die in Varanasi are rewarded by instant salvation. The ashes of others who die elsewhere – and whose families can afford it – can still achieve salvation by having their ashes immersed in the purifying waters of the Ganges. Non-believers, of course, have a somewhat sceptical view of the purifying qualities of a body of water that is undeniably filthy.

Death is big business in Varanasi and for people like me, who had only seen her first dead body that day, to get anything out of this place it’s important to very quickly get used to being around corpses. The dead are everywhere. Within minutes of arriving, I found myself stuck in traffic next to a horse-drawn cart with a body openly exposed in the back.

Arriving at the ancient heart of the city, my final leg of the journey was completed on foot as the streets are far too narrow to accommodate vehicles. Reaching a blind bend, I was whacked in the head by something coming from around the corner. I turned to find it was the cold feet of a corpse that was being carried on the shoulders of a couple of unapologetic porters.

My hotel room was on the top floor and offered a spectacular, if not very hazy, view of the Ganges. The fully windowed-wall opened up onto a spacious balcony, but I decided against going out when I saw the family of monkeys who had inhabited it.

I’m not good in large crowds of people (making India in general quite tough going), so Varanasi was always going to be extremely challenging. I wandered down to the water and discovered that directly under my hotel was a burning ghat, which certainly explained the hazy view from my window.

Nothing can prepare you for the first glimpse you catch of a human body being engulfed in flames when it’s so desperately unfamiliar to you.

Some corpses were lined up in an orderly fashion, the water lapping at their feet, ready for submersion. Others were strewn around awaiting their time on the fire. Seemingly, legs from the knees down are the last to succumb to the flames so it was a frequent sight to have disembodied lower limbs smouldering in the embers.

In among the grieving relatives, kids ran around gleefully, playing tag and leapfrogging over anything in their way, including bodies.

I took a slow, sunset boat ride along the holy water. Our guide explained that bodies are sometimes weighted down and placed in the river – either because the families can’t afford the cremation process or because certain types of death preclude it. On cue, a shape bobbed up next to our boat and floated along with us for a while. The body was clearly that of a heavily pregnant woman. Our guide proved how pure the water was by cupping some in his hand and drinking it.

When the sun dipped, we anchored up in front of a temple along with a number of other boats. A stage appeared to be set on the river bank and as my eyes grew accustomed in the dimming light, I realised that behind the stage were vast numbers of people. We stayed a while to watch speeches and performances but made tracks when the crowd began to surge into the water.

It was apparently the festival of Maha Shivratri and tens of thousands of pilgrims were descending on Varanasi.

Our guide offered us a cup of the drink made especially for the event, Thandai, a mixture of milk, almonds and cannabis. I declined and was told I was likely to be the only person in the city who wouldn’t be high that night.

The effects of it were obvious in the seething crowds I encountered when hurrying back through the narrow, winding streets to my hotel. Everyone I met (namely groups of males) was excited and energetic; loud chanting filled the air from every passing person.

I made it to my room and again spotted the clouds of smoke drifting up; I now knew it to be from the 24-hour burning ghat directly below. The bang of fireworks pierced the sky, terrifying the monkey family on the balcony. The images I’d seen that day wouldn’t disappear and the acrid smoke of dead human flesh and bones was lodged in the back of my throat and in my nose.

The monkeys spent the entire night banging on my window, their beady eyes pressed up against the glass as if begging to be let in from the mayhem.

But, I could neither forgive nor forget. It was one of their kind who, only 24 hours before, had launched a hard, blunt object at my head.

Early next morning I bid Varanasi farewell. As much as I love India, Varanasi really wasn’t for me.

Family members accompany their deceased relative to the ghats by bike cart. 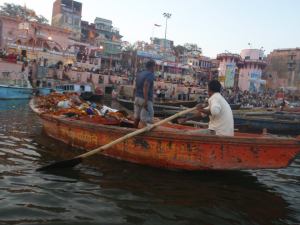 Getting into position for the festival celebrations on the banks.

Tens of thousands of pilgrims getting high on life. And cannabis.