What’s not to love about Stevie Wonder? The man is a freakin genius and when the opportunity came up to see him live, I was ON it.

I was half way into my six month stint as an au pair in Paris which, to this day, remains my favourite city in the world. So many good memories.

Shame this one is tainted.

A friend had come to visit from London and I’d bagged us tickets to see the great man in concert. We hopped on the metro and settled in for the quite substantial journey out to Bercy Arena. It was evening rush hour and we were lucky to have seats; Lizzie on the inside next to the door, me aisle side. It had been a while since I’d spoken English and hadn’t seen her since for ages, so there was no shutting me up as we made our way out there, regaling her with exciting stories of things I’d been getting up to.

There wasn’t a spare inch of breathing space as home-bound commuters rubbed shoulders with an increasing number of Stevie Wonder fans. I would have preferred the guy standing next to me would lay off on bumping into my shoulder with his groin, but hey, at least I had a seat and he didn’t.

It was the height of summer and steaming hot; beads of sweat trickled down the back of my bare leg from the crease in my knee.

I went on and on; try though she might, she just could not interrupt me. I had SO much to tell. And I knew I was being entertaining as her eyes were getting wider, as was her jaw. Then, she could hold it in no longer. ‘Move towards me. Don’t turn around, but if you must, do it with your mouth closed.’

I did all of these things in a half-cocked fashion and discovered that Monsieur Bumpy Groin was conducting himself in a rather more full-cocked manner, having managed to produce his pride and joy in all its glory on my shoulder.

Undoubtedly shamed, but not enough to actually get off, he shuffled away deeper into the packed carriage to sniggers from fellow passengers.

Another story to add to the list for the next visitor.

As we got closer to Bercy it was only Stevie Wonder fans who remained on the train, our numbers swelling with each stop. The hard core ones were now out in force; Lizzie and I had fun judging who the best Stevie lookie-likies were.

About five stops before our destination, Lizzie and I still in our pull-down seats next to the door, a group of huge, American black guys got on sporting ‘Stevie Wonder Tour’ jackets. They helped a further guy get on, advising him there was a gap between the platform and the train. Safely on board, they proceeded to place him in the pull-down seat directly opposite me.

He had the sunglasses, the long braided / beaded hair and he rolled his head rhythmically from side to side as though moving to the music in his head.

Yes, he did bear a passing resemblance to Mr Wonder but no more than anyone else in the carriage at that time. Making out he was blind was a step too far I felt and I let it be known I was neither impressed nor fooled by it. I didn’t actually say anything but did so through a series of facial expressions, in particular shaking my head, tutting and giving him disapproving looks.

The group kept up the charade all the way to Bercy, by now openly calling him Stevie, and piled out onto the platform with the rest of us.

I was so intent on keeping up my withering ‘one is not amused’ looks for as long as possible that I didn’t immediately notice the hot, wet sensation on my leg but gradually became aware of something not quite right.

As the beeping of the doors sounded behind me, I turned to see my old friend Monsieur Bump and Grind standing in flagrante, waving triumphantly at me with more than just his hand.

His good aim had been my sticky misfortune.

I managed to put it out of my head for the rest of the evening which, by the way, kicked off when Stevie Wonder came out on stage and said, ‘Hey! I took the metro to work today!’ 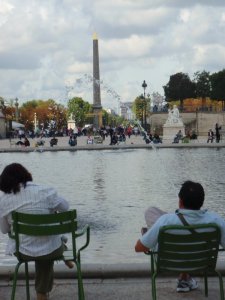 It’s all in the framing 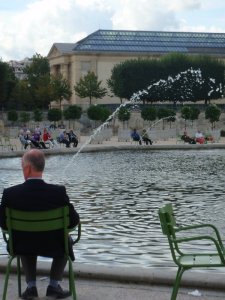