If there are words that would make my heart sink more than, ‘You will be held in the Foreign Detention Centre until further notice,’ I’ve yet to hear them. I’ve had the misfortune to hear these particular ones twice, once in Kenya and, only a few years earlier, in India.

On the short flight from Chennai on the mainland across to Port Blair, gateway to the idyllic Andaman and Nicobar Islands, I genned up on the quickest way to reach Havelock, intending to make the move that same day. It was Sunday, I was due to land at 12.30 and the last ferry was departing at 1400; it was going to be extremely tight but I was up for the challenge.

While touching down, I memorised the layout of the airport from my Lonely Planet; I knew which way to head to get my permit validated (including a tip off of on which lane to take that often went unnoticed) and I knew where to go to book a cab. If all went according to plan I would sail through customs and be on that ferry to paradise within a couple of hours.

As luck would have it, I was seated right next to the exit and was the first person to disembark the plane. While those behind me dithered about trying to decide where they needed to go, my photographic memory told me exactly the direction to take.

I was the first to arrive at the immigration desk and hastily filled out the necessary form. By this point the masses had caught up with me and the usual chaotic scenes ensued. Waiting for my stamped permit to be processed, I scoured the airport for where I anticipated seeing the taxi office. And there it was; slightly hidden away and hopefully secreted enough to throw others off its trail.

I had this nailed.

I could almost smell the Andaman aromas.

My official permit was issued and handed over to me; the finish line was within sight. I grabbed my backpack off the carousel and raced across to book my cab to the harbour.

From running off the plane to sitting in the cab had taken 20 minutes – I was impressed. At the rate the driver was going, however, I was in danger of it all having been in vain, so I ramped up the urgency.

‘But Madam, it is Sunday, the last ferry has already left. You will need to stay one night and leave in the morning. I know nice place that I can …’

‘Ah, now, come on, I’m not falling for that one, put your foot down and get me to the harbour sharpish.’

His words rang in my ears. It was, of course, perfectly possible that the timetable I had was out of date. What I didn’t want, was to get there, find out he was right and then have to hotfoot it back to town to find a hostel in competition with the rest of the plane who would by that point have got there before me. I had a quick look at accommodation options and decided on where I would try first should I need to.

Needless to say, he knew best; there were no more ferries that day.

I would have to stay over, so the race was now on to find an available room.

After going through the standard, ‘No, thank you, this is the hotel I’d like to see first before whichever one you’re offering,’ we pulled up at the Aashiaanaa Residency Inn, which interested me because of its proximity to the port for an early start the next day.

‘Yes, we have room, please wait for cleaner.’

As is common, my taxi driver still held out on the off chance I wouldn’t like the room and that I’d then ask to be taken elsewhere. We both sat on the porch and waited.

It wasn’t long before my fellow passengers turned up in their droves.

‘You have a reservation?’

‘Yes.’ Pause. ‘Ok we have room, please wait for cleaner.’

This oddness continued with each person who arrived, with us all now sitting tight waiting to be shown our rooms – including all the drivers.

‘Hello, I have a reservation.’

‘But I have a reservation.’

‘Please wait here with others.’

After an hour or so I was led upstairs to see my newly vacated and cleaned room. Ignoring the fact that my driver had also come in to check it out (including, at one point, testing the firmness of the mattress) I happily agreed to take it.

I dumped my bag and returned to the desk to give my details. At this point I could hear a group announcement being made to all the people who’d been told to wait for a room.

A sneaky scam if ever I’d heard one. Nonetheless, my speed had at least paid off in that I got the last ‘available’ room – even if it had been promised to someone else.

‘Madam, this permit is not legal, you must return to airport immediately.’

‘Eh? Yes it is, I’ve just come from the airport and that’s where I got it – look, it’s been stamped, all the dates and names are correct – what’s the problem?!’

‘No handwritten number. Please go, without this I cannot accept you at hotel, no other hotel will accept you and you cannot take transport anywhere. You will be arrested if you stay without it.’

I left my bag at the hotel and jumped in the nearest tuk tuk.

Arriving back at the airport a mere hour after I’d landed, it already looked decidedly different. The doors were shut and burly armed guards stood behind. I managed to get one of them to open up and attempted to shove past, my trusty tuk tuk driver in hot pursuit.

Despite not speaking more than a handful of local words, it was painfully clear that the guard was explaining I couldn’t go any further.

‘Airport now closed,’ my driver translated, ‘you must to leave.’

Not liking my tone, the guard asked to see my permit.

‘Oh! Not good,’ he said, cocking his rifle and radioing for immediate back up.

Before I knew it I was surrounded by guards, each with their rifle trained at me and no amount of me trying to explain my predicament had any affect but instead made the situation far worse.

Another man appeared and introduced himself as the airport manager. Luckily for me, he spoke excellent English and I relayed what had happened – it seemed at last to fall on sympathetic ears.

‘The only problem is,’ he said, ‘you were on the last plane in so as you can see we are now closed and everyone is on their way to enjoy Sunday with their families – and that includes the immigration staff. You will have to return tomorrow.’

‘And where do you suggest I stay? I understand no hotel can take me?’

‘Please do not worry about that,’ he laughed, ‘we would not see an esteemed guest in our country sleep in the streets. You will be taken to a very secure place with a clean bed.’

‘Oh no Madam, to be clear, you are now under arrest and we are confiscating your belongings. You are coming with us to the Foreign Detention Centre where you will be kept in a cell and escorted to the legal officers tomorrow to see if they will believe your story.’

I was frogmarched to the manager’s office and, once inside, handcuffed to the chair. He proceeded to make some very officious sounding phone calls and I decided I’d do the same while I was still in possession of my mobile.

Pretending to dial a number, I then very loudly and entirely for his benefit had a fake conversation.

‘Yes, Number 10 please, it’s Debbie Nugent. Hello? Oh, hi Nick, how are you? Good, good, look, sorry mate I can’t chat – is Dave around? Thanks. Dave, hi, Debbie here, spot of bother. Sorry to be disturbing the day off of the BRITISH PRIME MINISTER but I need your help.’

Nothing, not even a raised eyebrow.

I was relieved of my phone, passport and money and driven off in the back of a van at high speed.

We reached the FDC and I was locked in the ‘very secure place with a clean bed’ (aka a tiny cell) and all but abandoned, apart from the two armed guards who remained outside my door.

They hadn’t spotted that my Kindle was a 3G model and I spent the next few hours sending messages back home and telling the world my dilemma via Facebook. As offers of calling the British Foreign Office came flooding in, the airport manager had meanwhile managed to get hold of a kindly immigration officer who was prepared to cut short his Sunday and come out to remedy the situation.

After five hours of incarceration, I was released and returned to the Aashiaanaa, with no expectation of them having kept my room.

I was pleasantly surprised to discover that they had and I went on to have a peaceful sleep ahead of my early start. In the morning, before setting off for the ferry, told them I wanted to make a reservation for a week later on the night I was due to return to Port Blair. To secure my booking, I paid in advance.

Havelock was amazing and I was sorry to be leaving when the time came.

‘Hello. I have a reservation.’

‘Here’s my receipt, I’ve already paid for a room.’

‘No Madam, we are fully booked.’

My own private beach on Havelock 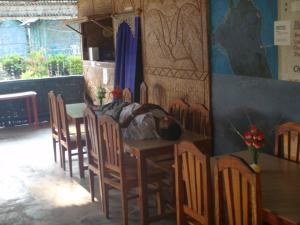 I know, I KNOW, but it just made me chuckle