Our jeep turned into a bumpy field on the outskirts of Siem Reap and sped across to where three hot air balloons were majestically swaying in the orangey light, their baskets tethered by a small number of young Cambodian boys with sinewy arms . We screeched to an unnecessarily dramatic halt, dust clouds were sent billowing into the air, up our noses and down the back of our throats.  The prospect of a sunset flight with the amazing Angkor Wat as a backdrop was intoxicating.

And with no further ado, up we soared, ten of us (including the, erhem, ‘pilot’) crammed into a basket made for six. No time to waste, certainly not with anything as trivial as a safety instructions.

We were all slightly winded by the unapologetically rapid ascent. As though already approaching the upper limits of the stratosphere, the air began to thin and was cold to breathe in. A hazy glow blurred the horizon and the dusty field was now but a distant memory.

And then, an almighty roar let rip above me accompanied by a blast of intense heat. It was, of course, just the pilot trying to navigate our celestial vehicle by controlling the amount of gas being released and flame being lit. The result, however, was more akin to how the poor relation of the hot air balloon (the standard party variety) behaves when the air is let out unexpectedly; high-pitched squeals accompanied by fast-paced darting in every direction with no particular purpose other than to eventually fall to the ground – not a great prospect. There were audible intakes of breath from everyone in the basket as we took a dive steadily downwards, then recovered altitude stability only to be swept off course in a sidewards fashion. This was not looking good.

Until this point we’d had only fields beneath us and the lower we got the more the cattle freaked out. As we approached the outskirts of a small town a number of new perils lay in our path. Directly below us now were groups of kids running along in great excitement, arms outstretched. The danger lay in the instructions our pilot gave us, which were to throw down coins for them to catch – still from a quite considerable height. Fearing law suits on behalf of killed or blinded children, we all kept our hands firmly in our pockets.

Next came the network of electricity pylons which we somehow managed to narrowly avoid. These were followed by a cluster of trees whose tops we definitely came into contact with. We were definitely too low at this stage but still the pilot look unconcerned. This may be because he was concentrating on aiming for what now lay directly ahead – a three story block of apartments with a broad roof.

A resident enjoying the last of the day’s sunlight from his top floor balcony was fixed on us approaching. Looking very much like someone who had already witnessed this too many times before, he stood his ground in a grim game of chicken. Barely perceptible twitches began to break out on his otherwise perfect poker face. Our pilot showed no signs of changing course; we were heading straight for the roof top. All around me in the basket people began shouting and pointing; still the man remained composed and still our pilot refused to budge. Finally, all hell broke loose with nothing short of a mutiny onboard the balloon; everyone grabbing what they could to in an attempt to avert the impending disaster. The man had by now lost his composure and was jumping up and down, frantically waving his arms and shouting Khmer obscenities. The pilot seemed genuinely panicked and at last made an effort to abort what was clearly a daily game between the two.

I could not wait for this bloody flight to be over.

Thankfully, it looked as though the end was in sight. It had obviously looked like that on a number of occasions already, but we now appeared to be heading for an official landing target. The large, white circle loomed ahead, flanked by a small cluster of men who were watching eagerly as we began to swoop down at an alarming rate. The landing patch had been placed in an open space with no obstacles in the line of descent. However, just the other side of the patch was a deep ditch. Worse still, not 100m from the deep ditch was the arterial road into the city which at this time was straining under the weight of cars, tuk tuks, motorbikes and bicycles in the height of rush hour.

The men threw their arms up and tried their damndest to grab at anything that would bring the basket down to its resting place. But, true to form, our inept pilot overshot the target. Only the very tenacious of the men managed to hold on to ragged bits of old rope that dangled from the basket, but we weren’t ready to land just yet.

We carried on floating above the ground, dragging a handful of the men along with us. When we came to the ditch there was total wipe out and not a single one of them resurfaced from it. And so we continued, nonchalantly heading towards the busy highway. Our clumsy descent and impending crash landing was anticipated by a small boy walking on the road who began shouting Cyclists zigzagged drunkenly, motorbikes went full throttle to get out of our path, a couple of brave people stood in the middle of the traffic trying to stop cars from a seemingly inevitable and yet utterly bizarre collision with a hot air balloon.

The ladyboy passenger onboard with us was crying. His beautifully made-up face was streaked with mascara and terror.

We bumped down into the middle of the road, finally settling on the third bump. I wasted no time and jumped out of the basket; a motorbike swerved to avoid me. A fellow passenger followed in hot pursuit but we were met with piercing screeches as the basket began to lift once more with the decrease in weight; the remaining passengers were quickly stopped from vacating. The balloon was still undecided as to whether or not to stay airborne or come down gracefully. With the basket now being tethered by the locals to prevent those still onboard going off on another adventure, the balloon had finally had enough and began to fall. The final challenge of this whole sorry episode was to find safety from the voluminous material. Fast-moving vehicles started getting caught up in it along with now hidden standers-by such as us. The basket was on its side; the ladyboy was distraught.

When finally the dust settled, the organisers of the flight gathered us all together with big smiles, handing out bottles of water and – with not a hint of irony – asked if we’d enjoyed our flights.

Never, ever again.  But we did make it into The Phnom Penh Post …

Writing on neighbouring balloon appears to say ‘Cheating’ something. ‘Death’, maybe? Or ‘Bastards’?

And away we go

Way too high too soon

The sun isn’t the only thing going down fast 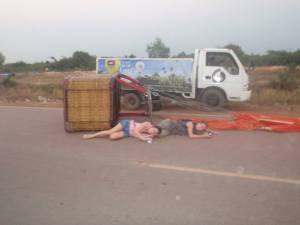 This is a reconstruction. I did not actually die. 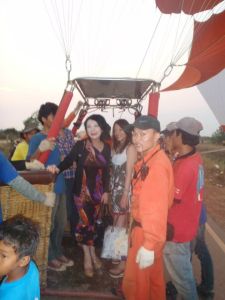