If the opportunity ever arose to return to Mother Russia, I wouldn’t have to think twice. The single most difficult visa I’ve ever had to organise was for this place, so although I would absolutely rush at the chance of going again, I now know it’s not a process you can hurry.

If you’re contemplating a visit yourself, I’d really recommend you test your mettle first by applying in person for your visa at the consulate, instead of taking the easy option and going through an agency. It’s an experience which definitely separates the hammer from the sickle.

The office operates in almost total silence and expects visitors to do the same. Dismissed with a scowl and a hand gesture, I took a scary looking application form with me into a booth. Although it was summer, a guard wearing Cossack-style headwear patrolled the floor.

I’d tried three times that afternoon to submit my application but was sent away with a flea in my ear due to some miniscule error. Fearful of being slapped across the back of the knees with the Cossack’s rod, I kept my exasperated sighs to a minimum.

The summons to the counter for the 4th time came with the call, ‘Hey you. Lady with the funky trousers.’

Clearly designed by people who really don’t care whether or not you visit their country, in an additional bit of bureaucratic nonsense the form has to be accompanied by a letter of invitation from a resident of the country. Given that most tourists won’t know too many Russians, a letter from your hotel is acceptable. However, as I would be staying with friends who, as non-Russians, weren’t authorised to issue a letter, my apparently unusual application to travel independently was eyed suspiciously.

With steely determination however, I succeeded in convincing them my intentions were honourable and eventually I was winging my way to Moscow.

My French friends showed me around this amazing city expertly well, although one incident in a restaurant took me a little by surprise. It was a lovely venue and the staff were amongst the friendliest Russians I’d met. François took charge of ordering.

‘We want our cocktails first, all of them at the same time. When you see that our glasses are empty, you can bring our starters, all at the same time, but not a second before we have finished our cocktails. Bring the wine, chilled, as soon after this as you can. Allow us all to finish to our starters fully before you either attempt to take away the plates or bring the mains. When it’s obvious that we’re finished our starters – all of us, not just one – you can collect the plates. We would like a period of about 10 minutes before you bring us the mains, all at the same time. If you are replacing the cutlery please make sure you do this in the break period before bringing the mains or, at the latest, at the same time as the mains. If it’s not possible to serve the sides – both of them – at exactly the same time as the mains, you have no longer than two minutes to come back with them. If we wish to have desserts we will order them once we have all finished our mains, so please do not ask us mid-way through eating our starters. If we do order them, you will serve them all together and at that point check if we would like coffees. Do you understand?’

I gave François a questioning look but all I got in reply was, ‘If you only knew.’

The meal came and went without incident and was in fact quite delicious.

I loved Moscow but before long it was time to bid my friends a fond ‘do svidaniya’ and hop on a train to St Petersburg.

St Petersburg is an undeniably beautiful city but far too touristy for my taste.

I was also horrified by the number of people who’d been forced into begging. There is seemingly no place in Russia’s evolving ‘open’ society for anyone deemed to be past their sell-by date. Those who didn’t have many assets (either financially or skills-based) have now been left to fend for themselves.

With no welfare system or pension schemes, the elderly have been the hardest hit.

Typically it’s the women who are out on the streets, desperate for any scrap of food or money, while their disenfranchised husbands drink themselves into an early grave.

I slipped a note the equivalent of about £20 to a blind woman. She cried as she accepted it but was saying something I didn’t understand. A passerby stopped and explained that the woman was asking me how much I’d given. As I was unable to answer in Russian, the newcomer gently eased the note from her hand, ostensibly to see its value.

But then, faster than you could annexe Crimea, he vanished.

Although it was about 2 o’clock in the morning, this took place at the height of the amazing Belye Nochi, (‘White Nights’), during which time the sun doesn’t set for about three weeks. Locals are used to it and just get on with their normal routines but tourists are stumbling around everywhere with very confused body clocks, determined to make the most of 24 hours of daylight.

As the opportunist thief made good his escape, a family dining just yards away from the action looked totally nonplussed. It was hard to tell exactly what had caused their confusion.

Was it White Nights taking its toll?

Was it the sorry scene they had just helplessly witnessed?

Or was it, as I suspect, more to do with the fact that their stern, unsmiling waiter had just arrived with two ice cream desserts, one potato soup, a samovar of tea, a side dish of boiled of beetroot, a solitary after dinner mint and three meaty mains? 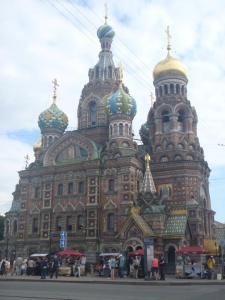 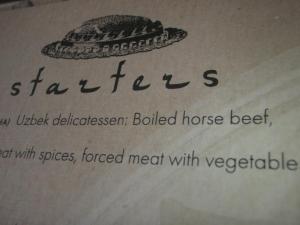 Why order 2 separate dishes of sweet and savoury when you can have one big mixed dish? 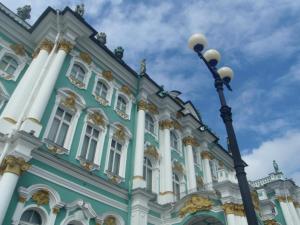 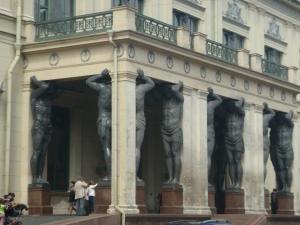 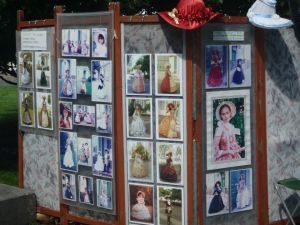 Dressing up fun in St Peterbsurg 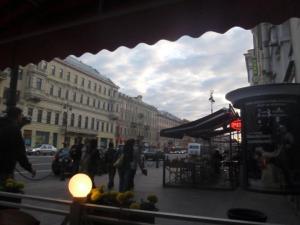 2am in St Petersburg