On the evening of Friday 2 June, our Leavers’ Ball was in full swing. After four amazing years as an undergraduate (where, clearly, I learnt far less about French Language and Literature than I did about French wines) I was about to be launched into the big wide world.

It was a bittersweet party. I was sad to be leaving the beautiful city of York which had been my student home but could not WAIT for the following week and my trip to China. Booked on a flight just days later on the Monday, I had the weekend to say my ‘tarras’ to Yorkshire.

My friend Ali had been in Beijing working as a Nanny for an envoy at the British Embassy for the past year and I was to spend the summer with them. I’d been very excited to receive my official letter of invitation which was to fast track me straight to their ornate, lacquered door.

1989 was going to be a brilliant summer.

Although little information was coming out of this notoriously closed country, international news reports had been covering student protests since they’d begun in April, gaining fast and steady momentum. They were viewed by Deng Xiaoping’s government as ‘counter-revolutionary’ behaviour and the authorities were becoming increasingly reactionary.

By late May, Martial Law was in place.

‘Sufferin’ sweet and sour,’ I sighed.

Bear in mind that they were simpler times back then. Mobile phones and emails were not available to the average person; the majority of us were still writing longhand letters.

So, by the time I’d woken up, sobered up and packed up, this had happened … 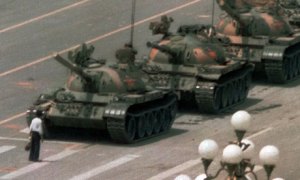 … but I had no way of contacting Ali for advice.

I had a connecting flight in Hong Kong and decided to stop there until I established whether or not it would be clever to continue to Beijing.

If ‘apprehensive’ best describes the feelings I had while heading to my destination, I’m not entirely sure what word would sum up how it felt to actually land at Hong Kong’s now defunct Kai Tak airport, and so I will instead quote Wikipedia:

‘With numerous skyscrapers and mountains located to the north and its only runway jutting out into Victoria Harbour, landings at the airport were dramatic to experience and technically demanding for pilots. The History Channel programme, ‘Most Extreme Airports’ ranked it as the 6th most dangerous airport in the world.’

Yep, that about covers it.

‘Deadly Dim Sum,’ I declared, as we thankfully touched down safely.

Within an hour I was on a bus trundling to downtown Kowloon. Stepping off, I was engulfed by a swarm of people thrusting hostel flyers into my hand. Basing my decision only on my father’s name, I decided on one called Tom’s Guest House in the Chung King Mansion.

The word ‘mansion’ translates from the local term for ‘shit hole’ – or so it appeared. The complex is a handful of tower blocks containing budget accommodation, cafés, African curios shops and residences. My tiny room was basic and clean but I regretted asking for one with a window.

I was on the 8th floor and my view was of the small interior gap between the three other towers to the left, right and straight ahead. What it lacked in natural light, it made up for in smell. I still refuse to believe this was actually the case (as I note that, to this day, Tom’s is still going strong) but I was convinced that people were throwing rubbish out of their windows into the communal square-shaped ground space below. The waste was creeping up the side of the towers, fast approaching the windows.

I took a power nap before venturing out for dinner.

I was only gone a couple of hours and when I returned, the Chung King Mansion foyer was swimming with police.

Convinced that Martial Law had reached Hong Kong, I was weighing up my options when a policeman approached and pushed something in my face.

‘You know this man? He foreign.’

I peeled the photo off my nose and had a look. Wherever he was from, the man didn’t look good.

‘You sure you no know him?’

‘Right, why are you showing me a photo of a dead man?’

Hmmm, maybe I’d made a rooky mistake coming here. I would sleep on it and decide what to do.

The next morning there was an official-looking Brit in the foyer who I got talking to. He said he and a group of others had just landed from Beijing and word on the street was that the Foreign Office was advising people not to go to China as the violence was spreading fast.

To this day it’s still unknown how many protesters were actually killed in the Tiananmen Square massacre, but some estimates put it in the thousands.

That afternoon, in a city populated by over 7m, I looked up to find I was standing next to someone I knew from the UK. Although it was his last day and we only spent a few hours hanging out, he reassured me that it would be worth my staying on. We were miles away from the trouble and the foreigner’s murder was just ‘one of those things’.

I’m glad I took his advice and it did go on to be a brilliant summer – just not the one I had expected. I spent a month there travelling around the outlying islands, Macau and even dared to take a trip up into mainland China.

It was all incredibly beautiful.

Upon my return home there was a letter waiting for me with a Hong Kong post mark; it was from Ali.

She explained they’d all been evacuated from the British Embassy and had had no means of contacting me. She and the group she’d travelled with had found a budget place to stay for a while until things died down.

It was a hostel in the Chung King Mansion.

‘What a calamitous caper,’ I concluded.